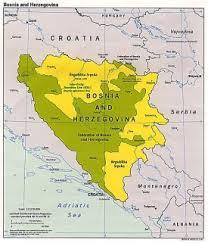 Today marks the 25th anniversary of the General Framework Agreement for Peace in Bosnia and Herzegovina, also known as the Dayton Accords. The landmark agreement between Serbia, Bosnia and Herzegovina, and Croatia, which officially ended the deadliest conflict on European soil since the Second World War, was brokered by the United States at the Wright-Patterson Air Force Base near Dayton, Ohio, some three weeks before its signing in Paris, France on December 14, 1995.

The peace accord not only marked the end of the three-and-a-half-year Bosnian war, which resulted in about 100,000 deaths, genocide in Srebrenica, and left another two million people displaced, but also outlined a complex constitutional framework for peace in Bosnia and Herzegovina, dividing the internationally recognised sovereign state into two semi-autonomous political entities: the Federation of Bosnia and Herzegovina and the Republika Srpska. In doing so, the agreement formed what could arguably be the world’s most complicated and decentralised system of governance. Today, the country’s 3.4 million citizens are governed by three rotating members of B&H’s Presidency – a Bosniak, a Croat and a Serb – 13 prime ministers, as many governments, 150 ministers, and some 700 elected state officials.

In the quarter of a century since the signing of the agreement, Bosnia and Herzegovina largely remained peaceful and achieved some developmental progress. Nevertheless, in the last decade or so the international peace-building efforts that led to this agreement were gradually reversed, and prospects started to emerge for renewed instability in the region. Therefore, on its 25th anniversary, it is necessary to question what was behind the agreement’s initial success, what led to it losing its efficacy, and what struggles lay ahead for the region if the current trajectory is not reversed. 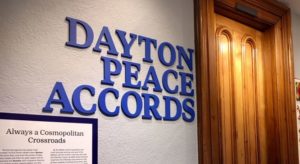 In the years following the signing of the Dayton agreement, NATO and the EU patiently put in place new structures and polices to move the fragile peace process in the Balkans forward. From late 1990s to 2004, both the EU and NATO were focused on expanding their influence beyond the Iron Curtain and integrating former Soviet nations into the US-led liberal order. This enthusiasm for expansion and integration helped motivate local Bosnian constituencies to accept the conditions for peace set out in the accord.

Throughout this period, peace in Bosnia and Herzegovina did not mean a mere absence of war – there were also substantial efforts to initiate political, institutional and economic transformation to ensure the sustainability of peace. Key reforms undertaken in the fields of defence, judiciary, market economy, border security and intelligence, to name a few, resulted in the formation of new state institutions that guaranteed stability and rule of law.

In the sphere of defence alone, a single ministry and a united military were established out of three opposing armed forces that had fiercely fought each other in the early 1990s. The number of peacekeepers from NATO-led peacekeeping missions – IFOR and later SFOR – in the country was reduced from 60,000 in late 1995 to just 7,000 in 2004. Around half of Bosnia’s 500,000 destroyed homes were also rebuilt and some 200,000 property disputes were resolved peacefully.

Dragan Cavic, then president of the Bosnian Serb-majority entity Republika Srpska, even publicly apologised for the Srebrenica massacre in 2004, calling it “a black page in Serbian history”. These and many other similar achievements were so remarkable that at the time Bosnia Herzegovina was seen as a prime example of successful peace building across the world.

In the second half of the 2000s, however, things started to change with Russia’s return to the European political arena. As Moscow started to make moves to expand its influence over the Balkans, peace in Bosnia and Herzegovina, still heavily dependent on multilateral support from Brussels, became more fragile. 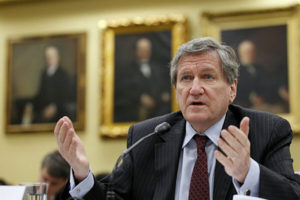 In 2008, one of the main architects of the Dayton Accords, Richard Holbrooke, and the fourth High Representative for Bosnia and Herzegovina, Paddy Ashdown, wrote a joint op-ed warning that Bosnia and Herzegovina was “sleepwalking” into another crisis. They desperately appealed to both Brussels and Washington to take immediate and concerted action to reverse the course of the country. Ever since, many more academics, diplomats and policy experts warned that the fragile peace in the Balkans is on the verge of collapse, and that Bosnia and Herzegovina is threading a thin line between stability and new conflict.

Indeed, for over a dozen years, Bosnia and Herzegovina has been in a peaceful stalemate. Russia is colluding with its local proxies to destabilise the country’s long-established vision for security and sustainable peace through Euro-Atlantic integration. The Bosnian Serb-majority entity, the Republika Srpska, meanwhile, is actively trying to reverse the peace process and courting Russia as an ally.

The current Serbian member of the rotating Bosnian Presidency, Milorad Dodik, for example, has held numerous official consultations with Russian President Vladimir Putin over the past few years. Emboldened by the US and the EU’s diminishing desire and ability to safeguard the Bosnian peace, as well as Russia’s growing power in the international arena, Dodik voiced his ambition to reverse key institutional reforms undertaken after the signing of the Dayton accords. He also wants to organise a referendum to allow Bosnian Serbs decide whether Republika Srpska should secede from Bosnia and Herzegovina.

More importantly, Bosnian-Serb authorities led by Dodik are regularly threatening to pull their soldiers out of the country’s unified military, making moves to strengthen the Republika Srpska’s police force, and calling the UN mandated EU peacekeeping mission in the country, Operation Althea, to be terminated – all of which present significant security dilemmas for the country, the Balkans, and the entire European continent.

At the regional level, Serbia, which shares a long border with Bosnia and Herzegovina and nationalist sentiments with the leaders of the Republika Srpska, are adding fuel to the growing Bosnian fire. Within months of the joint Serbian-Russian Slavic Shield military display in October 2019, Serbia’s Defence Minister Alexander Vulin announced, among other strategic objectives, his country’s intention to “defend” the Serb entity in Bosnia and Herzegovina.

This declaration demonstrated that Serbia has now assumed an interventionist approach in its relations with its erstwhile enemy, something that should concern anyone who wants the region to remain peaceful. Indeed, a similar attempt by Serbia to impose hegemony over Bosnia and Herzegovina was the root cause of the Bosnian war, which claimed thousands of lives, created millions of refugees, and resulted in a genocide in Srebrenica in the 1990s.

If Bosnia and Herzegovina continues in its current trajectory, the Dayton accords may collapse and a new conflict may 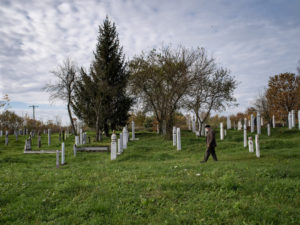 emerge in the Balkans. This nightmare scenario would effect not only Serbia, but also other regional powers.

Turkey, for example, could easily get sucked into such a conflict. Ankara’s interests in the region are aligned with its NATO allies and it views Bosnia and Herzegovina’s current international borders as definite and unchangeable. More importantly, it has deep historical, cultural and political ties to the Bosnian people and would likely not agree to watch the  country’s descent into war from the sidelines, especially if its NATO allies and the EU choose to abandon their commitments to safeguard peace and the liberal order in Bosnia and Herzegovina.

In the nightmare scenario of Republika Srpska’s secession from Bosnia and Herzegovina, Russia would also get involved, making the conflict not merely a regional but global problem. Republika Srpska’s political leadership, which largely opposes the current liberal and multicultural order in Europe, would undoubtedly turn to Moscow for political and military support in their efforts to form an independent state. This would allow Russia to become more influential on the European stage at the expense of NATO.

On the surface, the current tensions and ideological divisions in Bosnia and Herzegovina may appear similar to the ones that led to the 2013-14 Ukrainian crisis. Indeed, during that period Ukraine found itself divided between the leadership in Kyiv that has Euro-Atlantic aspirations and the pro-Russian minority in the east that has secessionist tendencies.

While there are some striking similarities between the situations in these two countries, the emergence of a conflict in Bosnia and Herzegovina that is similar to the one in Ukraine would have far more devastating consequences. While secession of Crimea was undoubtedly a blow for NATO that increased Russia’s influence over the region, a similar move by Republika Srpska would expand Moscow’s reach well inside Europe’s borders. Moreover, it would pose a direct challenge to Pax Americana and the 70-year-old liberal order in Europe.

In this context, disintegration of Bosnia and Herzegovina would transform into a Russian offensive against the West, likely triggering further collisions that would have overreaching consequences for not only Europe but the entire world. 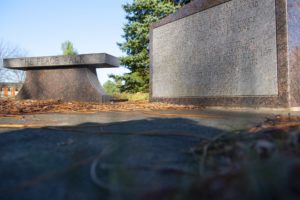 On its 25th anniversary, the future of the Dayton Peace Agreement appears uncertain. However, the very real threats to the hard-achieved peace in Bosnia and Herzegovina should not lead anyone to conclude the region is destined for instability and conflict. Today, Bosnia and Herzegovina still has a good chance of sustaining peace and fulfilling its aspirations to become an indispensable member of the liberal European order – it just needs to look back at its recent past, remember the devastation it experienced in the 1990s, and collectively work towards building on the foundations set with the Dayton Agreement.

Dr Emir Hadzikadunic is a Senior Research Fellow at the Islamic Renaissance Front. He holds a PhD in International Relations from the International University of Sarajevo and was the Ambassador of Bosnia and Herzegovina to the Islamic Republic of Iran (2010-2013) and Malaysia (2016-2020). This essay also appears on Al-Jazeera at https://www.aljazeera.com/opinions/2020/12/14/dayton-peace-disagreement-25-years-on