Is Bosnia-Herzegovina Next on Russia’s Radar?

Could the vulnerable Balkan state become Vladimir Putin’s next target? Russia’s invasion of Ukraine has raised fears among many Bosnians that their vulnerable state could also become a target. Like Ukraine and Georgia, both now having suffered Russia’s military intervention, Bosnia and Herzegovina too has NATO membership aspirations that infuriate Moscow. In Republika Srpska, Bosnia and Herzegovina’s Serb-dominated entity that, like the breakaway regions of Donbas, South Ossetia and Abkhazia, is opposed to NATO, Vladimir Putin’s prospects are of the highest geopolitical value, namely securing a loyal proxy ready to do Moscow’s bidding.

The Russian president has already held numerous official consultations with Bosnian Serb leader Milorad Dodik, the latest one taking place in December 2021. During his second consecutive meeting with Putin in the midst of the 2014 Ukraine crisis, Dodik shared his unequivocal affiliation with Moscow, saying: “Naturally, there is no question that we support Russia. We may be a small and modest community, but our voice is loud.” As Russia’s current military intervention progressed in Ukraine, Dodik also spoke to Russian Foreign Minister Sergey Lavrov about the “implementation of agreements” reached during the last meeting with Putin. In the quarter of a century since the signing of the Dayton Accords, Bosnia and Herzegovina has been the site of occasional political crises but has never come close to military conflict. In recent months, however, Dodik has doubled down on his efforts to tear apart the postwar constitutional order of the country’s two constitutive entities, the Federation of Bosnia and Herzegovina and Republika Srpska. Emboldened by the resurrection of Russia’s power, he pressed ahead with his nationalist political agenda aimed at dismantling institutional arrangements that have gradually restored peace and security over the last 25 years. As a result, Dodik was blacklisted by the US government in January this year.

In December 2021, lawmakers loyal to Dodik advanced their secession bid and voted 49-3 in favor of starting a procedure for Republika Srpska to withdraw from central government mechanisms such as common defense, judiciary and intelligence, to name a few. They have also decided that within six months, the government in Banja Luka must recreate its own legislation governing such institutions.

To show it means business, Republika Srpska paraded paramilitary forces on January 9 in a nationalist celebration declared illegal by the constitutional court of Bosnia and Herzegovina; among the participants were the Night Wolves, a black-uniformed group of Russian nationalist pro-Kremlin bikers. On February 10, Republika Srpska’s national assembly adopted the draft version of a law to create a separate judicial system from the rest of the state. Regarding his future plans, Dodik said he won’t be daunted by opposition from the Western centers of power, suggesting that Moscow and Beijing will help if the West imposes sanctions.

Notwithstanding Russia’s local proxy, fanning existing flames in Bosnia and Herzegovina could be a rational adventure from Putin’s viewpoint for additional reasons. First, Serbian and Turkish reactions could fit the wider Russian agenda if this trajectory with opposing power dyads within the Bosnian state takes a turning point.

Second, Putin is aware of the EU’s record of conflict management in ex-Yugoslavia, and Bosnia in particular, in the early 1990s. It failed miserably to secure the peace in the heart of Europe, when the EU was a rising star and Russia was at its weakest point. Third, extending the current EUFOR peace mission in Bosnia may be vetoed by Russia at the UN Security Council in November.

It is worth remembering that Bosnia and Herzegovina doesn’t have NATO’s Article 5 mutual defense guarantee to fall back on, and that President Joe Biden’s promise to defend every inch of NATO is meaningless for Sarajevo. Washington’s official position on protecting the parameters of the Dayton Agreement is as vague as its strategic ambiguity toward Taiwan.

Serbia and Turkey in the Bosnian Theater

President Putin has many good reasons to count on Serbia to exploit Bosnia and Herzegovina’s internal weakness. Belgrade largely relies on Russian weaponry and strong nationalist sentiments with the secessionist movement in Republika Srpska. Serbia’s national defense strategy, officially promoted in late 2019, transcends national boundaries in its content, marking a shift from defensive sovereignty to a more offensive approach.

Serbia’s home minister, Aleksandar Vulin, the former defense minister who officially promoted this strategy, often exudes self-congratulatory confidence that the Western Balkans region is there for Serbia’s taking. At the ruling Serbian Progressive Party congress in July last year that took place a few months before the joint Serbian-Russian “Slavic Shield” military exercise, Vulin forcefully stated that “Creating the Serbian World, where the Serbs would live and be united, is the task of this generation of politicians.”

Serbia has also accelerated military spending at a faster rate for several years now for no rational reason except regional supremacy. According to Global Fire Power, its current defense budget is almost twice that of Bosnia and Herzegovina, Albania, Northern Macedonia, Montenegro and Kosovo combined. Serbia’s reliance on Russian and Chinese military support has also been reinforced. In 2019, it received donations of fighter jets, tanks and armored vehicles from Russia. In 2020, it bought CH92-A drones and FK-3 surface-to-air missiles from China and then purchased, at Putin’s suggestion, the Pantsir S-1 air defense system.

It is critical to understand why Serbia is arming so fast: From a realist perspective, its behavior could only become assertive, and more so if Russia’s military intervention in Ukraine succeeds.

Turkey is probably the second regional contender to be caught in the Bosnian fire for both domestic and external factors. Under President Recep Tayyip Erdogan, Ankara has been projecting soft power throughout the Balkans, particularly in Bosnia and Herzegovina, relying on historical, cultural and economic ties. Turkey has also actively participated in all three peacebuilding missions in Bosnia and Herzegovina: IFOR (1995-97), SFOR (1997-2004) and is currently among EUFOR’s 20 contributing countries.

However, in case of conflict, Ankara represents an important geopolitical substitute should EUFOR abandon its commitments or if Russia vetoes its mandate at the Security Council. Western powers have for far too long watched from the sidelines and have practically allowed this trajectory with opposing power dyads within the Bosnian state to take root. Hence, Turkey won’t shy away from using its military clout in the region.

The conventional logic of Turkish enmity with Serbia sets Ankara and Moscow on a collision course because Vladimir Putin perceives Republika Srpska and Serbia as natural, historic and strategic allies. However, Russia would not necessarily oppose a Turkish role in the Balkans as long as Ankara’s move triggers some cracks within the Euro-Atlantic alliance. It also seems plausible for Turkey and Russia — historically perceived as brothers by the two confronting parties in the Bosnian theater — to test their mediating capacity modeled after the Astana format launched after the Russian and Turkish interventions in Syria.

Given their animosity with Russia or Turkey, some European powers would expectedly oppose their interference in Bosnia and Herzegovina on geopolitical grounds, while the more liberal ones will raise ideological concerns. Speaking on the subject of the priorities of the French presidency of the EU that began on January 1, President Emmanuel Macron assessed that the Western Balkans “is going through new tensions today. History is coming back. Sometimes tragedy is coming back.”

Macron also insisted on the “very special responsibility” toward these countries in terms of fighting external interference. What Macron fears is that extra-regional actors like Russia or Turkey could fill the vacuum, in which case power relations would inevitably become subject to reconfiguration. This scenario is not unfeasible as Russia does not project power in the Balkans for the sake of challenging Turkish interests in the first place. Its prime goal is to replace the existing US-led liberal, institutional and rules-based order with a more anarchic, illiberal and multipolar structure that fits Russia’s image.

A Slippery Slope for the EU and US 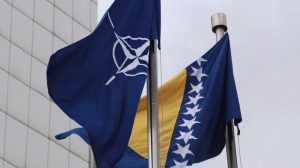 However, Bosnia and Herzegovina’s instability is far more complex than the crisis in Ukraine for one structural reason: It is not in Russia’s near abroad but in the European underbelly, which presents both an opportunity and a threat for all opposing sides at the local, regional and international level.

The EU has for some time failed to find a unified response to the Bosnian crisis, let alone taking concrete measures, except increasing EUFOR mission by an additional 500 troops. While some founding member states, including Germany, the Netherlands and Belgium, urged sanctions against Milorad Dodik during a recent EU foreign ministers’ debate, newer members like Hungary, Slovenia and Croatia oppose them. In fact, some European populist leaders have been staunch supporters of the Russian proxy in Bosnia and Herzegovina.

Croatian President Zoran Milanovic stated recently that he was against the EU imposing sanctions against Dodik, saying that “If someone from Croatia votes for those sanctions, for me they will be a traitor.” Hungary’s Prime Minister Viktor Orban offered €100 million ($110 million) in financial aid to Republika Srpska. Orban also opposed placing EU sanctions on Dodik, signaling an early warning that the EU, as a whole, may be unable to secure a peaceful Bosnia and Herzegovina, which again resonates with the EU’s poor historical record of conflict management in the region.

Hence, one should not exclude a possibility that EUFOR troops could be evacuated from Bosnia and Herzegovina one day altogether, much in the same way the Dutch UNPROFOR battalion was pulled from Srebrenica in July 1995, failing to prevent the Srebrenica genocide from taking place and making a mockery of UN resolutions on safe heavens. Should there be a prospect for this failure being repeated, the EU might decide to pass the buck on to Washington.

In that case, small-nation turmoil and squabbles among Balkan nations could transform into a great-power rivalry. Will President Biden accept that call given his unreadiness for direct confrontation with Moscow? The US would face a choice between realist logic, which is to revert European security to Europeans, or a more liberal and interventionist approach, which is to prevent Russia’s unchecked incursion toward NATO’s eastern border.

There is still time for the US to deflate Republika Srpska’s rebellion and put it back in the political arena. Former Bosnian presidency member Haris Silajdzic recently suggested placing a small NATO brigade in Brcko, the site of fierce battles during the wars of the 1990s, and a few battalions on the Bosnia and Herzegovina-Serbian border. If the US passes the buck back to the EU — which Russia and Serbia will celebrate — the West needs to fasten its seatbelts and brace for impact. More so than the war in Ukraine, a conflict in Bosnia and Herzegovina has the capacity to trigger a regrettable European history.

Dr Emir Hadzikadunic is a Senior Research Fellow at the Islamic Renaissance Front. He holds a PhD in International Relations from the International University of Sarajevo and was the Ambassador of Bosnia and Herzegovina to the Islamic Republic of Iran (2010-2013) and Malaysia (2016-2020). This essay also appears on Fair Observer at https://www.fairobserver.com/region/europe/emir-hadzikadunic-bosnia-herzegovina-republika-srpska-russia-balkans-security-news-87761/