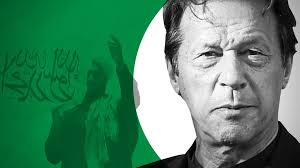 Among his many achievements, Imran Khan can also boast the unique honor of attracting detractors of remarkably varied stripes and persuasions. While some consider him a ‘Jewish Agent’ (an outright anti-Semitic framing), for others, he is an insidious sympathizer if not a banner-bearer of militant Islam. But although religious fundamentalists who hold the first view and liberal fundamentalists who espouse the second might seem like opposites, they in fact have much more in common than is often recognized. In this essay, I wish to briefly reflect on the second category of Imran’s antagonists, what I am calling liberal fundamentalists, and explore some of the conceptual problems and failures that saturate their “Imranophobia.” My main argument is that their abhorrence of Imran is more reflective of their own intellectual incompetence and myopia than about him.

What defines a “liberal fundamentalist” in the Pakistani context? Liberal fundamentalists are certainly not monolithic; they come in varied shades and sizes, and populate different segments and sectors of life including the media, politics, law, and academia. Nonetheless there are three overarching characteristics or qualities that define and lend coherence to this category. These are: 1) a blind faith in the textbook doctrines and virtues of liberal secular democracy, with no regard to context or interest in wrestling with its contradictions, 2) the secular embrace of an avowedly suspicious attitude towards religion as a foundational barrier to progress, and 3) the inability to recognize the intimacy of indigenous forms of violence with the violence of British colonialism and American neo-imperialism. Liberal fundamentalists detest Imran because he does not fit the bill regarding these core values and dispositions. He is the beardless internal ‘other’ who is not quite as easily dismissible as the body of the bearded religious brown man. Liberal fundamentalists want Imran to be like them but he is not, hence the visceral reactions of contempt. But even a cursory examination of some of their signature indictments frequently leveled against Imran reveals the flawed assumptions that sustain them. 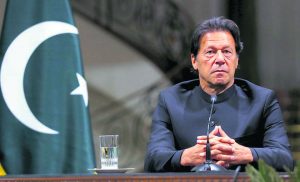 Take for instance some of the liberal reactions of despair and alarm to the recent disqualification of Nawaz Sharif. Certainly, the question of precedent set by a landmark legal judgment is an important one. And no doubt, any judicial or political interference of the deep state must be thoroughly condemned. But, granting these qualifiers, one would have hoped for at least some gesture of disappointment on the tragedy involved in a sitting Prime Minister and his family’s stunning exhibition of lies, forgeries, obfuscations, and financial malfeasance. One would have hoped for at least some note of celebration at the sight of the accountability of a powerful symbol of corruption, even if that accountability were partial and incomprehensive. But to the liberal fundamentalist, any hint of justice targeted at accounting for the corruption of the political elite must entail a threat and conspiracy against democracy. Moreover, that threat is invariably enfolded in a narrative of the establishment’s empowerment. According to this warped inverse logic, a glaringly corrupt Prime Minister should be left untouched because otherwise, the military will march to power. Imagining a political order that has no place for corrupt monsters from either the civilian or the military elite is a task too creative and difficult for the liberal fundamentalist to conceive. All this is a prelude to point out the shallowness of the incessant diatribe against Imran that he is too occupied with a politics of agitation. Or that him and his supporters are too harsh and uncivilized in their protest against the corrupt elite (note the colonial overtone of this patronizing accusation, as though coaxing the irrational enraged native to fall in line with the civilized habits of the rational colonizer). Turns out that it is precisely agitation that actualized the hope for some semblance of accountability. Turns out that given his stunts during the Panama hearings and egregious shenanigans since, the former premiere deserves some choice words far more scathing and incriminating than anything Imran has ever uttered.

Let me now turn to the other most common accusation lodged against Imran: his alleged sympathy for religious extremism and militancy, best encapsulated by the mocking appellation of ‘Taliban Khan.’ The label ‘Taliban Khan’ says more about the intellectual incompetence and inferior reading list of those who use it than about Imran. A less polemical engagement with his position offers the promise of a more nuanced understanding of the interaction of power, politics, and violence. At the heart of Imran’s position is the contention that the metastasis of militancy in Pakistan is intimately entangled with the conditions and havoc generated by the US led war on terror. His point is conceptually very sound. He is pushing us to think more carefully about relations of power: how certain forms of power generate conditions conducive to the production of particular forms of discourse and practice. Surely, the story of so-called ‘Muslim religious extremism’ cannot be divorced from the US war on terror, from the unjust US occupations of Muslim countries, and from the mayhem and catastrophe they have unleashed. 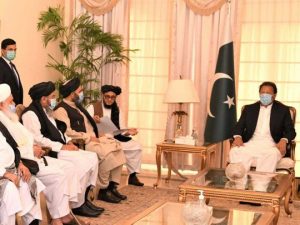 Note, lest careless readers rush to the refuge of predictable rejoinders, this is not an argument of cause and effect. It is not an argument for blaming everything on the US. Yes, everything cannot be blamed on the US, just like everything could not have been blamed on the British Empire in the 19th century. But to say that colonialism then and US imperialism now are not integral to the violent disruptions that have historically and contemporaneously wrecked the global South, including Pakistan, is at once untenable and uncouth. One may quarrel with specific aspects of Imran’s views, like the effectiveness of negotiations with the Taliban or the call for the opening of their headquarters. One could also reasonably critique him for not speaking out against the persecution of oppressed minority communities like the Ahmadis more frequently and more forcefully. But his underlying push for a power sensitive understanding of violence and militancy that takes the injustices of empire to task is historically grounded, conceptually nuanced, and politically productive. The critical analysis of a problem is a much wiser path to its resolution than applying the comforting balm of knee jerk condemnations. At any rate, only an imbecile, with a particularly insidious penchant for interpretive ineptitude, would read his position as an endorsement of violence or as a drive to “mainstream extremism.”

Let me make one last point in closing. The label ‘Taliban Khan’ speaks to a much deeper discomfort that haunts the liberal fundamentalist: his discomfort with Muslim religious scholars and their institutions of learning (madrasas). Imranophobia and Madrasaphobia are intimately entwined, as seen most revealingly in the visceral reactions of outrage that followed the KP government’s assignment of funds for curricular reform to Madrasa Haqaniyya last summer. I am neither privy to nor wish to endorse the political calculations that went in to that decision. But the reactions of horror it espoused stem from, I would argue, a caricatured view of madrasas as outdated relics of the past at best or worse, as explosive (pun intended) bastions of terror. Imran does not participate in such a dehumanizing view of the madrasas and its inhabitants, and that does not sit well with the liberal fundamentalists. Now the point is not to glorify or romanticize the madrasas either. There are many aspects of Madrasa education and activities that one could and should be critical of, as many scholars and students attached to them will be the first to admit. Moreover, no doubt, there are more than a few religious scholars who fulfill every liberal caricature that exists about them, as the recent Faizabad dharna amply demonstrated.

But just like generalizing about Islam from the violent actions of some individuals marked as Muslim represents Islamophobia, stereotyping madrasas because of the behavior of some religious scholars constitutes Madrasaphobia. The broader point is this: a dismissive and sensationalized view of madrasas as dangerous and jaundiced institutions crying out for the prophylactic of liberal reform can hardly attend to the dynamic and often complex conversations and debates among Muslim religious scholars, in Pakistan and beyond, on pressing problems such as violence, gender justice, and minority rights. These conversations do not make the headlines of leading English dailies, but one can find them abundantly in such venues as the monthly online Urdu journal “al-Shari‘a.” Readers more comfortable with English can see the splendid recent book Modern Islamic Thought in a Radical Age: Religious Authority and Internal Criticism (Cambridge University Press, 2012) by prominent religion scholar Muhammad Qasim Zaman for a close reading of some of these debates in Pakistan.

Among the most debilitating factors that prevent a more nuanced and sympathetic consideration of Muslim religious discourses and debates is the curse of the tripartite education system that further reinforces the hierarchical polarization of society. Again, more than any other political figure, it is Imran who has most piercingly diagnosed the catastrophic sociological and psychological effects of this cleavage of the country’s education system into the elite private/lower and middle-class public/lowest class madrasa schema. This hierarchy is not only unjust. It also thwarts the possibility of a more confident and richly textured negotiation between the heritage of the Islamic tradition and the conundrums and promises of modernity. Thus, one cannot help but laud Imran for taking initiatives such as facilitating exchange visits between students from public and private universities and madrasa students. Such experiments in listening sympathetically to the internal ‘other’ are critical to curating a less polarized and ultimately a less violent society. Indeed, in a country increasingly sandwiched between suffocating varieties of religious and liberal secular fundamentalisms, Imran brings some necessary nuance and complexity to the national conversation. But nuance and complexity are qualities that are often a bit much for the liberal fundamentalist to handle.

Dr SherAli Tareen is Associate Professor of Religious Studies at Franklin and Marshall College. His book Defending Muhammad in Modernity (University of Notre Dame Press, 2020) received the American Institute of Pakistan Studies 2020 Book Prize and was selected as a finalist for the 2021 American Academy of ReligionBook Award. This essay also appeared in Global Village Space at https://www.globalvillagespace.com/liberal-fundamentalists-and-imranophobia/