Losing in the battle with Satan 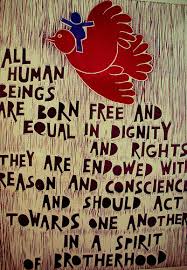 The topics of democracy, liberalism, human rights are not new in contemporary Malaysia. However, with almost every discussion some  new points are promoted or strengthened at one of the contesting sides.

Remarkably, promotion of the debates does not reduce the power with which polarization between conservative and moderate ideas is going on. It also seems that all the terms that according to conservative minds pertain to the Western Satan tend to be put into one basket. Democracy, liberalism, sovereignty of people, human rights, freedom of conscience, they all belong to some devilish Western world which hidden agenda is to destroy the beauty of Islam.

If only the world was simply black and white, I believe we would have solved many of our problems a long time ago. However, if the West took a cautious stand against different cultures originating from Islam, the East in its broad sense is struck by similar disease – to attribute many of social imperfections to some targeted influence of the Western world – lacking of appropriate morals, beliefs, values, very materialistic in its very core.

Here two important theses come. First is that in such a way, we, Muslims, reduced our self-identification to the banal confrontation with “the other”. Second is that we simplify our task, reducing the homework that must be done. While we still stand vehemently criticizing some abstract West and its destructive manipulations and life style, that very West in its many faces continue its path to welfare. To give us some donations later, by the way, in the forms of grants allocated by various international organizations and local NGOs. Last Thursday evening, 17 April at Shah’s Village Hotel in KL, a debate on the freedom of conscience organized by the PAS’ Youth Wing of Lembah Pantai with the participation of Ikatan Muslimin Malaysia (ISMA) and the Islamic Renaissance Front (IRF) touched me by the passion of ISMA’s Deputy President that yet again unfolded the topic of conflict between Islam and democracy, Islam and human rights.

Apart from denying that there are evidences of crackdown on religious minorities in Malaysia, Aminuddin Yahya of ISMA stressed that these are “Westerners who are trying to harm the Islamic integrity in Malaysia by spreading the ideas of democracy and liberalism”. While the word “democracy” might be beautiful, the agenda underlying it is very ugly, commented Aminuddin Yahya. It was followed by the usual argumentation, which is quite fair in theory, but not the way it is practiced, about that sovereignty could not belong to the people when it already belongs to Allah. Otherwise, people get the right to decide what is lawful and what is not, then they can legalize alcohol consumption for everyone, gay marriages and so on and so forth. “Western tradition to give freedom in all respect is harmful”, – said Aminuddin Yahya.

There is a crucial question that comes with the last statement. If we were to restrict freedom, according to whose wisdom are we going to decide? Of course, not according to the Chinese or even the lesser Indian minority wants, or to the stand of moderate Muslims of this country?

There must be a group of conservatives that would assume the duty to implement the Islamic state and hudud, and then to judge the rest of the multi-religious population according to their interpretation of Islam. While the fact is and it was mentioned by IRF’s Director in the debate that the main taxpayers are Chinese and that JAKIM gets a handsome sum out of this for their activities. So in actual fact, the Islamic body is using the Chinese money to proselytize the Chinese themselves into Islam.

Last year, the budget from the Prime Minister’s Department to JAKIM was RM779 million and RM88.6 million was spent on missionary and proselytization activities. Now my question is, where does this arrogance come from, the one that let some of us put themselves into position of judges and the Islamic state constructors when even the main economic power does not belong to the Muslims? That arrogance that allows one to put himself into the position of moral judge, not the one that practices law according to the legal regulations, but the one that sees his place above the others, forgetting to praise God in the process. Turning ourselves into such kind of judges becomes neither more nor less than praising our selves. For this is the most abominable attribute in this religion.

And to recapitulate, this is basically emulating Satan of his arrogance in front of God.