On the free market-type critique 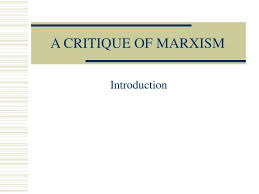 The October 1st– 7th edition of the Edge provides Lim Ewe Ghee’s third and seemingly final defence of income inequality. This time he addresses what he calls “the Marxist-type critique”.

In it he reiterates the same assertions from his previous articles, namely, that a free market system is fair because it rewards individuals based on hard work and innovation.  This, Lim adds, is why markets have become the most efficient mechanism of progress mankind has ever seen. Therefore the Marxist types are wrong.

In response, I present the following arguments:

One need not be a Marxist to be critical of markets

The reader of “Income inequality – the Marxist-type critique” will be disappointed to find that there is in fact little about Marx in the article. The word Marxist, in fact, is just mentioned once.

So who is the Marxist type? According to Lim he or she is one who expresses semblance of a “generalised antipathy to market economies, focusing on points pertinent to inequality, including the nature of markets”. In what can be politely termed as a stretch, Lim then links that antipathy to the “politics of envy” that supposedly characterized the Soviet Union.

There are two problems with that presupposition. First, the discourse against profit driven self-interest is far richer than what Marx or the Soviet Union represented. This is evident in texts dating from centuries before Marx’s time. It is found, for example, in Plato’s Republic which contrasted the pursuit of material gain and virtues, and later in Aristotle’s Politics whereby traders were viewed negatively since there is no telos or end point in the quest for affluence. Censures of comparable harshness can also be found in the Bible, notably in Mark 10:25 and Timothy 6:10.

These concerns reverberate today. Consider world renowned Harvard moral philosopher Michael Sandel’s latest book What Money Can’t Buy: the Moral Limits of Markets (2012) which presents a sustained dismantling of the core arguments for natural inequality that motivates the free market worldview. Lim will be surprised to find that Sandel is no Marxist. In fact, Marx features in the book almost as frequently as he did in Lim’s article.

There are other examples of non-Communist thinkers such as Amartya Sen who maintain that property is a right while nonetheless questioning the extent to which free markets are really meritocratic and beneficial for all.

Why then did Lim even need to mention Marx or communism in the first place? This brings me to the second problem. By equating redistribution and welfare with communism and Marxism, Lim is adopting the age old trope of libertarian defensiveness, and that is to reference the Soviet Union to erroneously posit any critique of the market system as out-dated, utopian or unpractical.

The problem is market injustice

Lim also seems to have misunderstood critics. Their claim is not that a free market is imperfect, but that it is unjust because the inequality it creates cannot be rationalized by differences in hard work.

This is what’s at stake: All human beings are born equal in dignity and worth, but we nonetheless live in a world of hierarchies. To legitimize this contradiction the beneficiaries of those hierarchies – who are typically few in number but powerful – often resort to some myth to justify having more privileges than others.

Similarly, income inequality is wrongly legitimized on the claim that the wealthy work hard while the poor are lazy, when in fact there are other more apparent and straightforward explanations.

For one, wealth in a free market economy is most likely to be inherited than redistributed, thus proliferating generations who are born into significant privileges without having to work hard.

Class, to be clear, is not just about how much one makes. The wealthy have better opportunities and networks in life, which translates to more enhanced access to education and social mobility. All this bypasses the great deal of hard work that a poor person will have to do to compensate for that lack of advantage.

Furthermore, the disparity in the ability to invest and reinvest and the power to out-buy and outbid one’s competitors, all place those who are wealthier at an advantage that can be best explained by economic differences, not talent or hard work. This is to say little of the influence that a wealthy class often exercises on policy makers to ensure pro-commerce, pro-corporation laws are passed.

Hard work should be rewarded but a free market economy would not be the system for that to happen.

Markets are not inherently good

The claim that markets are not utopias recurs in these debates because it absolves the libertarian from having to account for all the negative things that can happen under the pretext of trade. Ultimately, however, they would insist, as Lim does, that markets herald unparalleled improvements for mankind and the successes therein “serve humanity”, by and large.

The problem is that the claim is relative at best and is thus easily open to serious question. For example, the pollution of water and air and the environmental destruction that routinely takes place in the name of tourism, industrial manufacturing and development cannot be said to signal progress for all.

The profitability of cigarettes and pornography is based on encouraging – not eradicating – stress and misogyny. One can be innovative, “work hard” and get rich from the sales of landmines, weapons and predator drones without having to care if these things actually contribute anything positive to mankind.

To merely reduce all that to individual moral failings misses the point, for the wealth seeking choices of those individuals are encouraged by the very logic of profit driven self-interest by which free-markets operate. One can read Lim’s disapproval of lucrative but negative products as a call for taxes on vice or harmful activities, although this presumably would be incompatible with his free market worldview.

The problem then is not that markets are not utopias but that the very rationale underlying market activity can do little to solve or even diagnose the biggest problems facing mankind.

Lim is right to say that markets function efficiently because they are impersonal. Willing sellers meet willing buyers and little else is asked or thought about in the process.

But nothing about this arrangement renders all, or even most, of the transactions therein as desirable or progressive simply by virtue of them being voluntary monetary transactions between unrestricted individuals.

To evaluate more pressing questions on the relationship between markets and quality of life we will have to reflect on what exactly is being bought and sold and the terms and context in which the transaction is taking place.

Markets are not the measure of all

Lim made an interesting statement towards the end of his article. He said that human beings are not merely “economic” creatures, that there is more to our existence than just trade and the division of labour.

But he did not pursue the implication of this idea: if we are not just “economic men” then the free market logic should not be the principle measure of freedom, democracy and justice.

Even Adam Smith, who Lim spent almost half his article referencing, was cautious of the harmful effects of the division of labour and thus urged for the state-facilitated education of the poor.

Discovering the common good by which a just society can be built requires us to partake in deeper reflection about what is needed to sustain a life of dignity and happiness for all, whereby progress is just and sustainable. The answers, as I hope for this short article to show, will not be found at the market nor will profit driven self-interest pave the way.

This article was also published by Free Malaysia Today.