Putting homosexuality in the right perspective

KUALA LUMPUR: Some of the most emotional and divisive issues in our society, specifically issues concerning gay rights, revolve around two central and critical questions: should homosexual activity be legalised or branded immoral and illegal?

In an effort to bring clarity to these issues, an intellectual forum titled “Homosexuality: Crime or Right” was held at the International Islamic University Malaysia (IIUM) here recently.

Farouk (picture below, right) questioned state intervention in matters of personal morality, asking: does the state have a right to do this? He cited the sodomy case of Opposition Leader Anwar Ibrahim who was tried under Penal Code 377B. Anwar called for a review of the Penal Code after he was acquitted of all charges.

“Some people think that this Penal Code has some semblance to Islamic law. Since 1938, there were seven cases tried under 377; out of the seven, four were related to Anwar. It implies, to me as lay person, that 377 has been used as a tool to persecute a state opponent.

“Section 377A and 377B says it’s a crime to have adult consensual sex against the order of nature and it was introduced in the 1800s –a very archaic law, initiated by the British. Singapore modified 377 in 2007. It’s very important to have a clear demarcation where the state can intervene in this matter,” he said.

Drafted by Lord Macaulay in 1860, Section 377 is a sodomy law which criminalises “carnal intercourse against the order of nature”. The UN General Assembly declaration, which is not legally binding, condemns rights abuses against gays and urges states to pass laws to ensure that “sexual orientation or gender identity” cannot “be the basis for criminal penalties, in particular executions, arrests or detention”.

Human rights groups report that homosexuality is still outlawed by more than 85 countries and that it is punishable by death in several Islamic states, including Afghanistan, Iran, Saudi Arabia, Sudan and Yemen.

The UN declaration on gender and sexual orientation discrimination was sharply criticised by Islamic countries, which assert that it would promote sexual behaviour that is considered socially unacceptable. The Vatican also denounced the declaration. 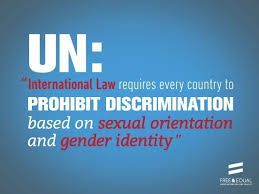 “The most important thing to understand is that we are born free with a conscience to decide what we want to be. Everyone of us must make decisions without coercion. If repentance is to be had, it must be sincere and it shouldn’t be done out of fear that the state would punish us,” Farouk added.

At the turn of the 21st century, criminal penalties for homosexual acts remained part of legal codes primarily in three countries.

Executions of homosexual men were reported in the 1990s in the radical, theocratic states of Iran and Afghanistan, as well as in Saudi Arabia. With the fall of the Soviet Union, most of the newly independent states, including Russia, moved rapidly to decriminalise homosexuality, but some Islamic republics still retain the Stalinist legal code.

Criminal law is, of course, not a reliable guide to actual practice. Applied to consenting, sexual behaviour, it is necessarily arbitrary and uneven. Enforcement typically relies on vindictive neighbours, police intrusion, or periodic campaigns of persecution which depend on the motivations of political elites and moral entrepreneurs.

Because it is a charge that is virtually impossible to disprove, sodomy law has long proven to be a convenient political weapon in the absence of legitimate wrongdoing.

Sodomy was a convenient tool for seizing control of the commercial empire of the former Crusaders, the Knights Templar, in the 14th century when French and Spanish monarchs grew covetous of their influence. The Nazi regime also used it to discredit and arrest political enemies. In 1998, it proved useful to the Malaysian prime minister Dr Mahathir Mohamad, who successfully imprisoned his political rival, Anwar, then deputy prime minister and finance minister, on charges of sodomy. 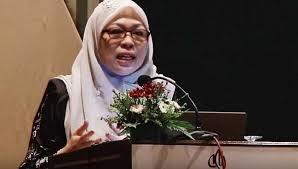 Shamrayahu (left) is all for homosexuality being deemed a crime. She said that she found it “embarrassing” to speak about it because “I am a lady, what more sitting in between two men. As a Muslim, I will say it’s sinful, but as an Islamic criminal law lecturer, I will say that it is punishable under hudud law. I am not a liberal. For me it’s a sin and crime. I disagree protecting the right of homosexuals. In any case, Malaysia doesn’t have the framework to do this.”

Shamrahayu added that Malaysia is a civilisation and all civilisations will collapse without purpose or objective. She asked the audience what is their purpose and ambition as a nation and cited the Rukun Negara as an example.

She cited that article 10 and article 11 of the constitution, saying that certain rights cannot be allowed if they interfere with public morality.

“If we acknowledge the rights of homosexuality, it means we condone it and that’s something I personally disagree with. The whole structure of the constitution does not provide a platform for this kind of immorality to become a right. Even if we separate religion from country, we cannot separate individuality from morality. It’s natural for humans to have ethics within themselves. If we don’t have a touchstone, we will follow human whims and fancies. [If you] allow this, then I am worried that drunkards will be bus drivers and rapists will be taking care of playgrounds.

“It’s not about Islam, but about all religious Malaysians. We just want peace and you will not have peace if the majority isn’t happy. If you do something in the privacy of your own home, then it’s fine. But when you do it in public, it’s upsetting the rest and it makes them feel uncomfortable – it’s like the Malay saying, ‘Jangan bakar kelambu kerana marahkan nyamuk’,” she said.

Food for thought on the matter was served by Lim (right), who asked the audience to consider two questions at a personal level: Do they know of any loved ones who are members of the LGBT (lesbian, gay, bisexual, transgender) community or suspect that they might be, and do they think these people deserved to be persecuted, condemned and imprisoned?

“Section 377A and B, which is incidentally a colonial inheritance, does not discriminate between homosexual and heterosexual sex acts. A woman giving a man oral sex is considered a crime under Section 377; so are we going to prosecute a heterosexual couple for this act? Many things are [considered] sins in this world… If you look at the French law, Napoleon took out homosexuality as a crime in 1810. There is the issue of privacy to think about and consider,” he said.

Western ideologyShamrayahu felt that the quest for gay rights is more of a western idealogy. “Do we want to be like the Netherlands which is now allowing civil relationships between same sex couples?”

To this, Lim gave the example of non-western countries, like India where the Delhi High Court struck down Section 377 A and B because they found that it was unconstitutional, citing that it hinders HIV+ schemes of education in schools.

“It’s not a question about the West versus the East. Among other countries that have struck off Section 377 are Cambodia, Japan, Laos, the Philippines, Vietnam and Thailand. Where does it say in our constitution that sexual minorities are supposed to be persecuted, humiliated?” he asked. Incidentally, The Netherlands has the lowest HIV rate in the world.

Lim added that the Malaysian LGBT community is suffering and stressed that Seksualiti Merdeka is not about promoting free sex; it’s only about a group of people who want to share personal accounts about how they have been discriminated against.

“The situation is very sad. We should all just keep an open mind and think about the things we are saying here. Malaysians are very peaceful people. If we abolish Section 377A or B, do you think the gay community is going to have mardi gras to celebrate it? No, they won’t because this is matter of privacy and right. A right not to be persecuted, humiliated or discriminated against at its lowest common denominator,” he said.

From what was gathered at the forum, it’s plainly obvious that there is a need for a broader conceptual shift in the understanding of sexuality. Rather than having moralistic laws that maintain the hierarchy of the natural and the unnatural, there is a need for laws that recognise sexuality as a positive aspect of human life.