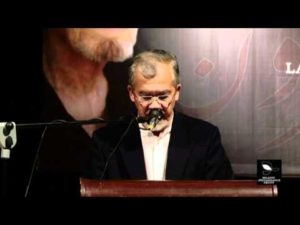 I am most honoured to be invited by Dr. Ahmad Farouk Musa, Chairman of IRF, to officiate the launching of a new Islamic NGO, namely the Islamic Renaissance Front (IRF).

The Muslim community in Southeast Asia and in Malaysia, in particular, is fortunate to have several NGO’s which are based on and committed to the vision of Complete Submission to Allah SWT, Peace, Justice and the attainment of Wellbeing in this world and Wellbeing in the Hereafter.  The presence of these  Islamic NGO’s would go a long way towards the revitalization of the Ummah on all fronts – spiritual, intellectual, social, economic,  political and civilizational.  As the Ummah is facing the multi-dimensional challenges of this “Age of Turbulence” (to borrow the phrase of Alan Greenspan), it needs to recapture its divinely mandated role of “the best community” which enjoins that which is good and prohibits that which is bad, and is capable of providing mankind with better alternative ways of addressing and solving the contemporary economic, political, educational, environmental and moral crises of the day.

The Islamic Renaissance (al-nahdhah al-islaamiyyah) which is part of the Islamic resurgence in the second part of the 20th century is a global phenomenon which developed during the period of Western colonialism, and emerged as a post-independent movement which is struggling for the reform, renewal and regeneration of the “sick” Muslim Ummah.  Led by independent reformist and revivalist Muslim leaders, intellectuals, scholars and social activists, the movement has helped to revive the Islamic identity of the Ummah as it navigates the post-independence journey which is fraught with the dangers of Westernization, secular modernization, cultural neo-imperialism, triumphant and Godless capitalism and neo-liberalism masquerading as Islamic moderation and enlightened rationalism.

The global Islamic Renaissance movement also had to contend with the internal challenges of religious extremism, radicalism, deviant cults and mystical organizations.  Guided and inspired by the principle of genuine Islamic moderation or the Justly Balanced Approach (al-wasatiyyah) of the Qur’an and the Sunnah, the movement has been able to steer clear of the two extremes of liberalism and Westernization on the one hand, and that of religious radicalism.

It is my belief and hope that the new Islamic Renaissance Front, under its wise and God-fearing leadership, will be another asset of the Ummah which would restore the good civilizational image of Muslims as people who have a firm conviction in the worldview of Tauheed (the belief in the oneness of Godhood and Divine Sovereignty in the universe) and uphold the principles of Eemaan, Taqwaa, ‘Amal Saalih, Ihsaan, ‘Adl, Al-Amr bi’l-Ma’ruuf wa’l-Nahy ‘an al-Munkar, Wasatiyyah and Peaceful Jihaad.  It is my fervent hope that the movement will be holding fast to the obligation to “hold fast to the rope of God together and are not divided” and not fall prey to the manipulations of political power struggle, or succumb to the temptations of base desires, worldly gains or deceptions of the polluted minds.  The responsibilities are great but the resources are limited; therefore it has to prioritize its focus in light of the religious obligations and its constraints.  But as long as its leaders and followers are sincere to the cause of Allah SWT and seek only to please Him, the movement shall survive for Allah SWT has promised that He is with the Godfearing, the doers of good and the true believers.  May God bless and guide the IRF to serve Him Alone, to do righteous deeds in this troubled world of ours and to reap just rewards in the Hereafter.  Aameen!