Synopsis of “The Real Cry of Syed Shaykh al-Hady” 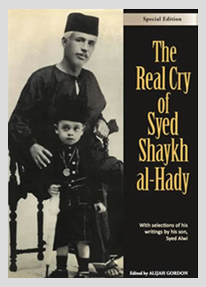 SYED Shaykh al-Hady, militant reformer of Islām and Muslims, has yet to be fully recognised nationally in Malaya for his contribution to the liberation of Muslim consciousness.

SYED Shaykh has yet to be recognised internationally for the part he played in this Malay extremity of the reformist movement started by the modernising theoreticians of the Islamic world, Jamāl al-Dīn al-Afghānī, Egypt’s Muhammad ‘Abduh, Rashīd Rida and others.

SYED Shaykh was one of the founders of al-Imām (The Leader) in 1906, a Jawi-Malay journal published in Singapore and dedicated to islah and tajdid, reform and renewal. In 1926-8, now based in Penang, he created al-Ikhwān (Brethren), the newspaper Saudara (Brother), as well as the Jelutong Press. In these, Syed Shaykh, Shaykh ‘Abd Allāh Maghribī, Shaykh Mohd. Tahir Jalaluddin, Imam Abu Bakar Ash‘ari, and others courageously attacked abuses wrongly sanctioned by a misinterpretation of what was the intrinsic direction and nature Islām, which they contended was at all times progressive and life-giving. They adamantly stood against taqlīd, the blind following of tradition, which Prophet Muhammad had warned would lead us ‘to crawl into the lizard’s hole’ if our forefathers had done so.

READING the criticisms of the Modernists vanguard of more than a hundred years ago, one is struck by the realisation that many are still valid today, that Malay society in its religious culture and religious-structure still stands in need of courageous islah thinkers if the life force of the Malay Muslim mass is to be allowed to come out from under the remaining coconut shell where no sun can shine in.

THIS compendium is dedicated to that vision.