Freedom of Expression or Freedom to incite Hatred and Violence? 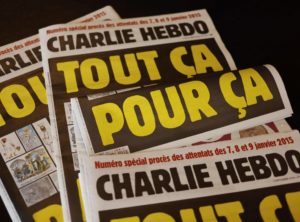 As a neutral (non-Muslim and non-religious) world citizen, I’m indignant at the media’s pathetic attempt to garner public sympathy by portraying Charlie Hebdo as a staunch defender of the freedom of expression, beloved by the French society at large. Nothing is further from the truth!

The French public supports the victims, not the magazine itself. As for being a great defender of free speech, ironically enough, Charlie Hebdo was accused in February 2015 of attacking freedom of the press when they tried to suppress the publication of Charpie Hebdo, a parody of its own magazine. So much for a sense of humor!

For those who may not know, Charlie Hebdo is a French (allegedly) satirical weekly magazine. Right from its inception in 1970, it has been banned, sued, and publicly criticized in France for continuous abuses, notably calling Palestinians “uncivilized”, mocking victims of tragic events such as plane crashes or boat accidents carrying migrants fleeing violence in Syria, besides its relentless, targeted and defiling attacks against Islam and Christianity alike.

Warnings were aplenty. Further to bans and legal suits, way back in 2006, French President Jacques Chirac strongly condemned “overt provocations”. He urged that “anything that can hurt the convictions of someone else, in particular religious convictions, should be avoided”. And in 2012, Foreign Affairs Minister Laurent Fabius warned that “strong emotions have been awakened in many Muslim countries.” “Is it really sensible or intelligent to pour oil on the fire?” he wisely cautioned.

But Charlie Hebdo has always thrown caution to the wind and defiantly published its blatantly racist cartoons. Isn’t this kind of obsession to shockingly offend and deliberately provoke exactly what is often castigated as extremism and fanaticism? 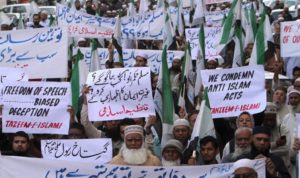 Despite all the provocation, the Muslim reaction was laudably restrained; first, they asked for a public debate to explain their grief, then they sought legal action, and finally, they resorted to protests on the streets only after their demands were rejected or ignored. Yes, those same people that are always portrayed as brainless, bloodthirsty terrorists reacted each and every time in a conciliatory and civilized manner.

Admittedly, human patience has its limits; in 2015, a group of Muslim extremists, sickened that the French state itself had given Charlie Hebdo the license to continue with its hate speech and bullying tactics, decided to put an end to Charlie Hebdo’s extremism by taking justice in their own hands. The fatal outcome made headlines.

The reaction of the self-styled “survivors” was incredibly cold, heartless and mercenary. While the whole country was in shock and praying for the victims, they didn’t waste any time in mourning. Instead, they spent the next day to secure up to three million copies, and the day after, to ramp this up to five million, instead of the usual 60,000.

In the weeks following the attacks, the French public rallied in various towns in honor of the provocateur-victims, naively believing they were voicing their support to the sacred principles of free speech.

Today, in 2020, the “survivors” still have no time for mourning. Once the date of the trial was announced, they rushed to secure the printing of three million copies of their vile literature. As of this writing, they are bragging that they have sold over seven million copies. Share the love… 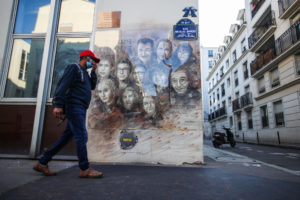 One wonders who the real victims in the Charlie Hebdo affair actually are. Are they the few Charlie Hebdo cartoonists who were killed? Or are they the much larger group of moderate Muslims who had to stoically endure the bullying of a small group of anti-Muslim extremists under a complacent, if not complicit, Republic?

Indeed, the whole affair is puzzling, leaving one with more questions than answers: How did a small, low-quality, despised publishing house manage to survive on their own for years despite repeated bans and lawsuits? Are they propped up by large invisible hands? Were they created for the sole purpose of inciting hatred? Do they have any hidden agenda?

Christian and Muslim communities – when not pitched against each other – have never had any trouble living harmoniously together.

The writer, a member of BIPI (Bijak Institute of Philosophy Indonesia), is a seasoned freelance French-English-Spanish translator and interpreter. She has worked extensively with international organisations in Europe and the US.