Informal Referendum on the Nuclear Issue: Why the conservatives will not be heard this time 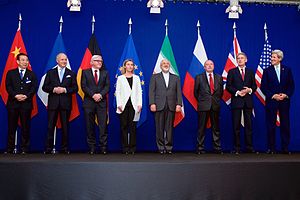 On April 2, 2015, or 13 farvardin 1394 on the Iranian calendar, marked for Iranians as a day of nature and the adjournment of the new year holidays, the Parameters for a Joint Comprehensive Plan of Action Regarding the Islamic Republic of Iran’s Nuclear Program were agreed upon.

The Supreme Leader of Iran kept silent, which in this case should be treated as a sign of approval. Many analysts had discussed the advantages of the interim deal as a whole and the disadvantages of it in details that appeared in the media.

Foreign minister Mohammad-Javad Zarif was twitting in real-time mode and probably the one who reacted among the first was the famous political analyst Sadegh Zibakalam: “If my fellow compatriots knew how much the nuclear program already cost to the nation, directly and indirectly, they would be celebrating in the streets by now”. 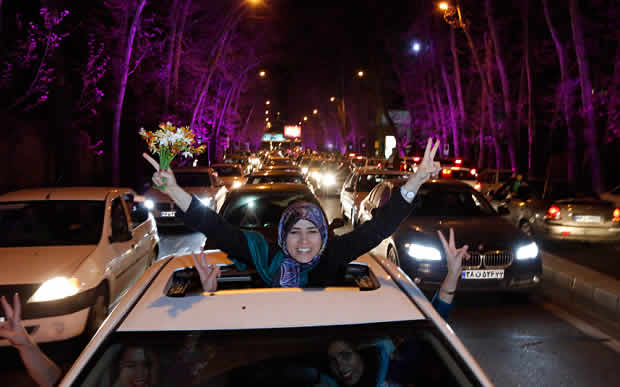 In fact, people came out to the streets and pretty quickly – the Internet blew up with photos and videos capturing young people dancing with clamorous glee. It is only that not everyone in Iran is convinced there was an unconditional reason for the celebration, albeit the positive comments that prevailed.

MP Ali Mottahari said that disregarding Ali Khamenei’s silence, all this time he had casted a wary eye on what was going on in Lausanne (1).

On Friday, following the day when the framework document was signed, that Friday Imam Emami-Kashani (who was appointed directly by the Supreme Leader) spoke in support of the agreement and the negotiation team. However, in Kashani’s list, rating the factors of success, the negotiation team endeavor only took the fourth place behind to the wise leadership of the Supreme Leader, the advancement of Iranian science and the results of the implementation of Iran’s Economy of Resistance plan in that order. Among the gains of the deal, Emami-Kashani mentioned the acknowledgement of Iran’s right on the enrichment and the agreement to lift up the sanctions. Meanwhile, that Friday Imam stressed that Iran’s return to the negotiation table was not a result of sanctions and the outside pressure, but an evidence of the rational approach of Tehran to the current situation (2).

Editor in chief of the Sharg newspaper, Ahmad Gholami, in his article, “Uranium Enrichment – Trust Building” delicately puts that the appropriate mise en scene became a cornerstone of success. For example, precarious economic situation in Iran served as a background to the negotiation process, but it did not become the real reason of success, thinks Gholami. The agreement was not possible neither with Rafsanjani being a president, nor Khatami or even Ahmadinejad, because the conditions were not right, says Gholami, implying the strategic decision of the Supreme Leader. However, he leaves aside the reasons underlying this decision (3).

The President, Hassan Rouhani, who called the agreement just the first step to the fruitful collaboration between Iran and the other countries and promised that Iran will assiduously implement its part of the deal, gave the most optimistic assessment of the interim result. “Centrifuges are spinning, so we need people’s life to ‘spin’ as well” – this was one of the mottos of Rouhani’s election campaign, and now the President intentionally underscores the significance of the agreement, even an interim, as an important step for improving the economic situation in Iran (4).

The response from the Iranian majlis was also mostly positive (5). For instance, MP Shahbaz Hassanpour believes that the negotiation team successfully played a kind of gambit, which was earlier mentioned by Ayatollah Khamenei; where Zarif made small concessions to win the major game (6). It also did not become a secret that the main negotiations took place between Tehran and Washington, so the main concerns are about the US commitment to the deal.  For example, paying a tribute to the mass glee, Matin Moslem in the Shahrvand newspaper agrees with the positive estimate of the negotiations at large, because there were no drums of war during the last one year and a half, besides the parties engaged into some trust building process. At the same time he throws cold water on the youngsters dancing in the streets; during the negotiations, adversaries of the deal had hoped for Iran to leave the negotiation table. Now, when there are not only options, but the interim agreement on the table, the ‘hawks’ will play trump opposing to Obama’s initiative in the new parliamentary session (7).  Therefore, Moslem suggests to oversee first if they will succeed or otherwise.

In its recent speech, Ayatollah Khamenei called the new 1394 year to be “a year of unity between the Iranian people and government”. Conservative media apparently considered the leader’s initiative on easing tension in relationship between the government and the people, and cautiously criticized the framework. On the other hand the reformists and liberals were seen to be precipitously over-joyous.

In the “Battle of Commentaries” in the Javan newspaper (associated with the Islamic Revolution Guard Corps), its editor in chief, Abdollah Ganji sarcastically argues that the current agreement was the only option for the USA, which, in fact, by their participation in the negotiations verified the failure of sanctions and irrelevance of the other options. However, this is not the most important of his comments. Ganji reasonably reminds the readers that Zarif ceded in several issues while he promised not to give up certain positions. For example, the negotiation team promised to keep all the enrichment facilities intact. Then how should we treat the situation with the Fordow enrichment facility now? Ganji compares Fordow under the agreement to a bus that is allowed to move, but prohibited from accepting more than one passenger on board. Besides, the Javan’s editor is wary of a simple shift of sanctions from the nuclear dossier to the profile of another issues regarding Iran, for instance, human rights issue. The USA are conducting negotiations as if they were at the table with an enemy, warns Ganji, thus, Iranians should not forget that the battle with “the enemies of the revolution” is not over even with the current negotiation that is still going on(8).

Asking the very same question about the strategy of the negotiation team, Mohammad Safari, in the conservative newspaper Siyasat-e rooz, recalls Zarif’s determination to attain cancellation of all the sanctions and also to forward the final agreement to the UN, so it would pass the resolution, compelling all the parties to annul all the sanctions, including the unilateral ones (9). Currently the framework agreement talks only about suspension, but not the cancellation of the American sanctions, which was mentioned by Barak Obama in his speech that followed the agreement. 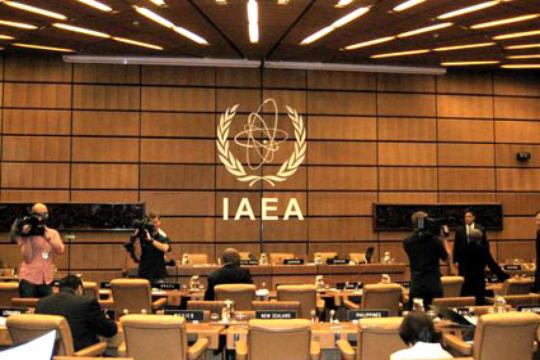 Safari also mentioned the Iranian concern about the impartiality of the International Atomic Energy Agency (IAEA), which is the final arbiter to verify Iran’s compliance with the deal, while, he argues, exactly the ambiguity of IAEA’s reports during recent years became the reason of protraction in negotiations. Then how can Iran be sure that the West will comply with its commitments, he asks (10).

Finally, the editor in chief of the conservative Kayhan, Hossein Shariatmadari, supports his colleagues, recalling the promises of the negotiation team that without the condition of full lifting the sanctions, the agreement would not be signed. Recently, after the collective letter of American congressmen to the Iranian government, Javad Zarif also stated that it will be impossible to reach the agreement on the nuclear issue without the guarantee that the Congress is compelled to withdraw the sanctions. The same way Shariatmadari is wary of the controversial role of IAEA, which assessment must comply not only with objective criteria but also with the political circumstances.

In our opinion, to celebrate anything before reading the text of the agreement is premature, and unduly optimistic. This time, curiously enough, conservatives address very reasonable concerns that regard the impartiality of the IAEA as a final arbiter; the possibility of the suspended sanctions to be reinstalled and the duration of the agreement that do not guarantee the subsequent restoration of Iran’s unrestricted status as a member of the Non-Proliferation Treaty (NPT). With these concerns in mind, the only reason why the agreement was initially signed and received such a warm reception in Iran is the approval of the Supreme Leader, of which this is still painful for Iranians to bargain. It is natural that the immediate participants of this process, that is Zarif and Rouhani, made an accent on the positive side of the agreement, in particular acknowledgement of Iran’s rights on enrichment and the perspective of lifting the sanctions. However, this will happen on the conditions other than those promised by the negotiating team at the beginning. This is for that reason that the Deputy Minister Abbas Araghchi, on his arrival to Tehran, rushed to tell the public that the agreement is only an interim one and can be amended in the course of the negotiation. For the same reason, the conservatives stress so intensively, that the West have to comply with its commitments. Eventually, for this same reason the analysts argue that not economic sanctions, but Tehran’s reasonable policy and good will became the real reason for Iranians to return to the negotiation table.

Theoretically, the ideal agreement on the Iranian nuclear program must include the most important element. This element is to save the face of the Iranian government that for many years stood firm on the nuclear issue and on the issues of international cooperation. We are observing this image is watering down right now.

Meanwhile, those who celebrated the deal needed not the text of the agreement, but the opportunity to conduct an ‘informal referendum’ on the concessions in the nuclear issue. Everybody and, it seems, even the blatant conservatives, grew weary of sanctions, politicization of the nuclear issue and the social tension. However it is not necessary at all to discuss that someone is giving up here. What is necessary is to look for the new forms of cooperation and in another perspective – for the national consensus on another basis, not the nuclear one and, perhaps, not even the post-revolutionary one.

Julia Sveshnikova is a Policy Analyst with the Islamic Renaissance Front. She holds a degree in Law from the Higher School of Economics, Moscow, Russia and accomplished her PhD in World Politics at the same university. Amir Roknifard is an information security specialist with an interest in Middle East politics.