SCRIPT – Anwar Ibrahim’s Vision for a Better Malaysia: A Review

“…the state whose prospective rulers come to their duties with least enthusiasm is bound to have the best and most tranquil government, and the state whose rulers are eager to rule the worst.”
[Plato, The Republic] ‘SCRIPT: For A Better Malaysia’, jointly published by Darul Ehsan Institute (IDE) and the Centre for Postnormal Policy and Future Studies (CPPFS), is Anwar Ibrahim’s latest publication. Written in view of theupcoming 15th general election, this 180-page manifesto encapsulates the Opposition leader’s policyframework that will guide the country’s long-term development as he seeks to fulfil the promise of his Reformasi campaign for a thriving, dynamic, inclusive and just Malaysia.

SCRIPT — an acronym for Sustainability, Care & Compassion, Respect, Innovation, Prosperity and Trust — embodies the six drivers or precepts that should guide policymaking to fix, recalibrate and empower a battered Malaysia in our postnormal times. According to the author, this new era is unprecedented; it is characterised by a world that is not only more globalised and interconnected, but also more conflicted, chaotic and complex. To navigate the treacherous sea of uncertainty, conventional approaches no longerwork. Hence the need for sophisticated instead of facile solutions to solve complex problems.

The six core drivers, Anwar Ibrahim stresses, are interdependent and need to work in tandem with each otherto be effective. He then proceeds to deconstruct them to show that they have been reduced to feel-goodclichés, if not meaningless platitudes, that mostly serve the vested interests of a privileged few. Unless revitalised, these emasculated precepts cannot serve as the pillars of a grand nation-building project: a house built on shaky foundations is prone to collapse.

In an attempt to invigorate these precepts, the Malaysian author summons all Malaysians to dig deep into their undervalued yet rich indigenous local wisdom for inspiration. To get the ball rolling, he illustrates how the enhanced precepts could unleash their transformative power by virtue of being more attuned toMalaysian reality and faithful to people’s aspirations, to which we shall now turn our attention.

Let’s start with sustainability. Generally, it refers to the responsible use of natural resources in a way that meets the needs and welfare of the present without compromising those of future generations. By incorporating two Malay notions, kemampanan (ongoing, collective effort) and keseimbangan (balance), aMalaysian definition would extend sustainability beyond the natural environment to include rural and urbancommunities, families and individuals who form an integral part of the ecosystem.

Indeed, God warns us of the consequences for indulging in excesses:

[Since they have become oblivious of God,] corruption has appeared on land and in the sea as an outcome of what men’s hands have wrought: and so He will let them taste [the evil of] some of their doings, so that they might return [to the right path].
[Sura ar Rūm; 30:41] Care is usually defined as the maintenance and protection of the health and welfare of others, while compassion is the feeling of sorrow or concern for the suffering or need of a loved one (another person or a living being) together with the desire to alleviate that suffering. Malay language has equivalent concepts: peduli (care); penyayang (carer, caring), a compound word from peng+sayang — sayang (love); belaskasihan (compassion) — kasih (love). In the Malaysian context, care and compassion would entail love forothers (one’s neighbours, one’s community, and other communities) in a more encompassing manner thatmakes it a duty to give and a right to receive, akin to the concept of zakat in Islam.

In this regard, God has ordained us to take care of the poor and the needy:

“Have you ever considered [the kind of man] who gives the lie to all moral law? Behold, it is this [kind of man] that thrusts the orphan away, and feels no urge to feed the needy.”
[Sura al-Maūn; 107:1-3]

Respect means due regard to the opinions, desires and rights of others based on their education,achievement and rank in society. It often includes elements of loyalty and obedience. The Malay language has two equivalents: hormat (respect of human dignity) and the Arabic loan word adab (courtesy, politeness, modesty). An enriched Malaysian concept of respect would emphasize inalienable human rights and dignityas the basis of civic behaviour; they are to be granted regardless of reciprocity.

The Qur’an enjoins us to treat all of creation with respect, honour and dignity. Respect for humanity includesstaying away from disseminating false news and sowing discord among the people. Respect also involvesloving others even if they are not from our own race or religion.

“O men! Behold, We have created you all out of a male and a female, and have made you into nations and tribes, so that you might come to know one another. Verily, the noblest of you in the sight of God is the one who is most deeply conscious of Him. Behold, God is all- knowing, all-aware”
[Sura al Hujurat; 49:13]

Another component of respect is treating others the way we expect to be treated and the way we hope thatGod will treat us, that is, with compassion and mercy. The barrier between us and the mercy of God is noneother than major sins which God has commanded us to steer away from. God admonishes us against two of those sins — spying and backbiting — that would throw society into chaos:

“Avoid most guesswork [about one another] for, behold, some of [such] guesswork is [in itself] a sin; and do not spy upon one another, and neither allow yourselves to speak ill of one another behind your backs…”
[Sura al-Hujurat; 49:12] Innovation, often associated with technology, refers to a new idea, product, process or system that is an improvement on an earlier concept or operation. In the Malay lexicon, innovation is translated aspembaharuan, pengenalan, rekacipta and reka baru — all of which are imbued with the idea of consciousdesign and creative endeavour. An innovative Malaysia provides a conducive environment for home-grown creativity to flourish and spawn better ideas, products, processes and systems that ultimately benefit the people.

The Qur’an spearheaded a scientific and technological revolution upon its revelation 1400 years ago. Indeed, the first verse revealed to the Prophet was Iqra’! Read! Numerous verses in the Qur’an hold people of knowledge in a special position while encouraging us to pursue knowledge diligently. It is only through science that we can discover and appreciate the workings of God. In fact, while it is common for people to say that God works in mysterious ways, we are more eager to say that God works in scientific ways!

In the first few verses of the Qur’an, God says:

“Read in the name of your Sustainer, who has created. Created man out of a germ-cell. Read – for your Sustainer is the Most Bountiful One. Who has taught [man] the use of pen.”
[Sura al-Alaq; 96:1-5].

Prosperity, generally associated with financial success and material comfort, is stripped of its overly materialistic connotation in its Malaysian version. Real prosperity, Anwar Ibrahim believes, is enshrined in the Islamic concept of falah (success, happiness and wellbeing). Falah, a word echoed five times a day in themuezzin’s call for congregational prayer, is central to Islam. Contrary to Marxism, Islam does not consider wealth as intrinsically evil. However, unlike capitalism, Islam extends the concept to the entire community rather than restricts it to single individuals, stressing that abundance is a blessing to be shared.

The Qur’an places special emphasis on wealth distribution: wealth should not be hoarded by the rich. In the Malaysian context, we find that the neoliberal policy of the current regime, with its emphasis on free marketand privatisation, have only benefited a few elites, especially wealthy entrepreneurs. This economic policy must be overhauled. What we need is a just economic system that is equitable to all irrespective of race and creed while upholding the true spirit of democracy, individual rights, tolerance, gender equality and pluralism.

Anwar Ibrahim’s vision for the economy strikes a chord with the Qur’anic message:

“There should exist among the citizens neither extreme poverty nor, again, excessive wealth, forboth are productive of great evil”
[Plato, The Republic]

Lastly, trust. Understood as an unshakable belief that something is true and in no need of empirical verification, trust is commonly associated with the preservation of self, wealth and property. Indeed, it is thefoundation of society. Amidst the current trust deficit in contemporary societies, local wisdom has three words to reignite the true meaning of trust: the Arabic loan word amanah (a vow of earthly, divine and spiritualmoral responsibility), and the Malay words kepercayaan (faith) and pertanggungjawaban (responsibility that needs to be honorably reciprocated).

Fulfilling amānah or trust makes one’s personal and social life more meaningful. It is not only a quality of the good believer but a hallmark of a person with dignity and integrity. Sadly, in our contemporary society,leaders who lack amānah are hailed as heroes. People have failed to understand the virtues of amānah as espoused in the Qur’an:

“…and who are faithful to their trusts (amānah) and to their pledges; and who guard their prayers [from all worldly intent]. It is they who shall be the inheritors; that will inherit the paradise; [and] therein shall they abide.”
[Sura al-Mu’minūn; 23:8-11]

After deconstructing, decolonising and enhancing the drivers that shall guide his reform agenda, Anwar Ibrahim then painstakingly shows how they could be applied in policymaking across all government sectors (education, economy, law, environment, culture, tourism, industry, agriculture, healthcare, transportation, etc). Indeed, these sectors are in tatters after years of blatant mismanagement, rampant corruption and entrenched cronyism: the education system is dysfunctional; the economy is shrinking; the cost of living keeps rising; more people are falling into poverty; the legal system has been hijacked by the rich andpowerful; environmental degradation continues unabated; foreign investors are leaving the country in droves; fear and suspicion between communities have escalated; the urban-rural divide has widened. The list goes on.

Reminding us of the constantly changing nature of our postnormal reality, the author cautions that, unlike Moses’ tablets, the policies outlined in this book are not carved in stone. Rather, while remaining true to theSCRIPT framework, he advocates an ethos of pragmatism: policies should be prioritized, adapted or discarded based on evolving needs and challenges of the times. 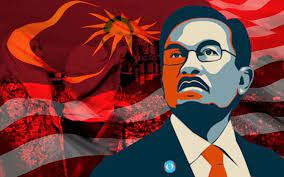 It takes unbounded imagination and immense reservoir of courage to come up with such a bold vision based on a new paradigm, and a solid plan to realise it. Indeed, it is the hallmark of a true statesman, a real leader. Undoubtedly, Anwar Ibrahim is such a man. He has all the qualities of a good leader: a strong moralcompass with an unshakeable anchor, the ability to manoeuvre in complex and uncertain environments, and the potential to create a space for renewal and growth for the turbulent times ahead of us. Despite multipleimprisonments and setbacks, he never gave up fighting for a just and inclusive Malaysia. He inspires us to follow in his footsteps to pursue common goals and create our own futures.

Like all manifestos, this book is a call for action. A call to be well prepared for unforeseen challenges before disaster strikes again. A call for all Malaysians – of all backgrounds, in all their diversity — to put aside theirdifferences, participate in building a better life for themselves and future generations, and partake in the achievements.

Readers will find this book eclectic in its approach; it draws on Anwar Ibrahim’s long political experience, readings, lectures, discussions and solitary meditations together with valuable inputs from various thinkers, strategists, economists, legal experts, political scientists and futurists. It is essential reading for anyone interested in Malaysia and its future.

**This review is also published by Free Malaysia Today at https://www.freemalaysiatoday.com/category/opinion/2022/10/11/anwar-ibrahims-vision-for-a-better-malaysia-a-review and in Academia.edu at https://www.academia.edu/88282245/SCRIPT_Anwar_Ibrahims_Vision_for_a_Better_Malaysia_A_Review?email_work_card=view-paper