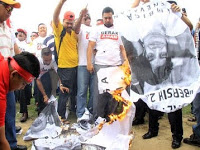 KUALA LUMPUR, Jun 20: An Islamic youth empowerment group has condemned the “inane behaviour” by several members of UMNO’s right wing offshoot Perkasa as well as the threat by its leader Ibrahim Ali over the weekend against the Chinese community.

In a statement expressing outrage over Ibrahim’s warning to Chinese to stay away from the July 9 rally called by electoral reform group Bersih, the Islamic Renaissance Front described the act of burning and stomping on pictures of Bersih chairperson Ambiga Sreenevasan as “extremely offensive”.

“The inane behavior of burning and stomping on pictures of BERSIH Chairperson Ambiga Sreenevasan was extremely offensive and disparaging. Furthermore to address her as ‘the Hindu woman’ is plainly rude and clearly depicted the insolent attitude of PERKASA’s President himself,” said IRF director Dr Ahmad Farouk Musa (right), who is part of Bersih’s steering committee.

Earlier, calling himself a “war general”, the Perkasa chief, who planned to gather his supporters for a counter rally hoping both groups would “clash”, raised the spectre of a racial riot should Bersih go ahead with its rally.

“If the Bersih rally is not cancelled… I believe the Chinese community will have to stock up on food.

“Yes, anything can happen. And so I ask the police to act and use whatever powers are at their disposal,” he was quoted as saying.

The remarks drew immediate condemnation, including from UMNO Youth leader Khairy Jamaludin in a move seen to distance the wing from Ibrahim’s group, while PAS Youth, condemning the racist language used on Ambiga, pledged to protect participants at the rally from any harm caused by Perkasa.

Dr Farouk meanwhile reiterated that the rally was being called to bring about reform in the way elections were currently conducted.

“There has never been an equal playground and we are tired of seeing all sorts of political harassments. Not to mention of the obnoxious corruptions so prevalent as if it is a norm in our society,” he said, adding that the recent state election in Sarawak proved that none of Bersih’s demands had been met. 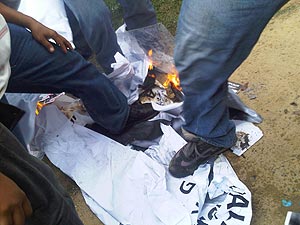 He also called on Muslims to voice out against corruption.

“To our Muslim brothers that wish to remain impartial and unmoved by the high-handed acts of contempt for democratic principles, we would like to remind them that their silence will embolden the corrupt despots and that no change will be seen if we just pray for change without any action on our part.

“Verily, God does not change men’s condition unless they change their inner selves,” added IRF’s statement to Harakahdaily, quoting a verse from the Qur’an.

According to Dr Farouk, Muslim history was rife with instances of Islamic scholars speaking up against unjust leaders, resulting in many of them being imprisoned.

“The great founding jurists of the major schools of law in Islam adamantly protested against their own school being adopted as the state canon of their time. Many were imprisoned as a result of their criticisms against rulers of their time.

“We are the inheritors of this tradition, which provides today’s Muslims with a storehouse of democratic ideas,” he stressed, and called on Malaysians to attend the rally “be it rain or shine”.