WEBINAR: Reading Session on “Be Careful With Muhammad!” with Dr. Shabbir Akhtar 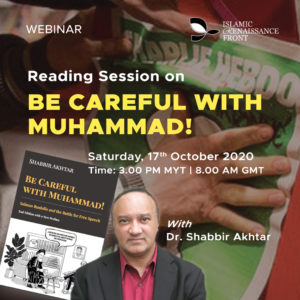 *The Zoom link for the Webinar will be sent to your email on Saturday, 17th October at 10AM.

The execution of the entire editorial staff of the satirical magazine Charlie Hebdo in January 2015, and the continuing attacks on their Paris headquarters, show that the battle for free speech still rages on with full fury. The trial of a dozen French Muslims, accused of complicity in the Charlie Hebdo killings, has started (October 2020). The struggle for absolute liberty of publication was initiated by Salman Rushdie’s The Satanic Verses (1988). Shabbir Akhtar’s “Be Careful with Muhammad!”, written originally as a critique of Rushdie’s provocation, remains relevant to current debates about the right to offend religious sensibilities.

Being an integral part of a campaign, Akhtar’s book, released barely a few months after the fatwa issued on St Valentine’s Day (1989), provides a contemporaneous account of the events surrounding this historic affair. This book surveys events – starting with the desperate book-burning in Bradford to the Ayatollah Khomeini’s unforgettably decisive fatwa that altered the power dynamics of this cultural confrontation. Akhtar became an authoritative commentator who patiently explained to non-Muslims why Rushdie’s book was an attack on the dignity, integrity, and indeed the very identity of Muslims and their scripture’s authenticity.

This documentary account chronicles the reactions of powerless and voiceless Muslims as they struggled to have their case heard before the tribunal of the literary media and publishers, influential legislators, politicians, and other leaders in secular Britain and the world. Akhtar scrutinises passages from Rushdie’s book while highlighting the bigotry and Islamophobia of his supporters.

While skilfully exposing Rushdie’s real intent – to malign Islam and seminal Muslim figures of the past – Akhtar argues that any faith, once stripped of political power, becomes vulnerable to the tyranny of writers and artists with no respect for the sacred. The author evaluates the principle of free speech, showing that it is hypocritical double standards to view it as absolute. The law justly places limits on it in order to protect vulnerable minorities against the malice of gratuitous assaults on some citizens in a secular liberal democracy where all citizens, of differing views, may nonetheless aspire to live in peace and harmony.

Dr Shabbir Akhtar, a Cambridge-trained philosopher, is on the Faculty of Theology and Religions at the University of Oxford, and has lectured at universities in Malaysia and the United States. He is also an expert consultant at BIJAK Institute of Philosophy Indonesia (BIPI), Jakarta. An original thinker, a prolific writer and a gifted speaker, Dr Akhtar is a public intellectual and a poet with a global reach into the western and the Muslim worlds. Dr Akhtar has published and presented widely on pluralism, interfaith dialogue, political Islam, extremism and Islamophobia, besides Islam and Christianity’s differing responses to the challenges of modernity. Dr Akhtar’s books include A Faith for All Seasons (Bellew, 1990; Ivan Dee, 1991; Pustaka Zahra, 1992), (Scorpion, 1992), The Qur’an and the Secular Mind (Routledge, 2008) and Islam as Political Religion (Routledge, 2011; CNS, 2017). In 2018, he published The New Testament in Muslim Eyes (Routledge, 2018), the first such work on the Greek New Testament in Islamic history. Visit Shabbir Akhtar’s website atwww.shabbirakhtar.com

310-320PM:    Preview by Nageeb Gounjaria, Publisher of Be Careful With Muhammad!