Speech by Dr Ahmad Farouk Musa, Director and Chairman of Islamic Renaissance Front (IRF) during a Lecture on “Islam and the West: Conversations with History” by Professor Tariq Ramadan, 13th July 2010.

Speech by Dr Ahmad Farouk Musa, Director and Chairman of Islamic Renaissance Front (IRF) at the International Islamic University of Malaysia (IIUM) during a Lecture on “Islam and the West: Conversations with History” by Professor Tariq Ramadan, 13th July 2010. 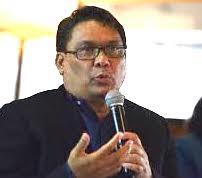 One of the most fundamental aspects of Islamic tradition is the recognition of the accomplished cycle of prophecy and all the prophets who preceded Muhammad. And one can only understand their meaning and function in human history if one has a clear idea of Islamic conception of humankind. Revelations come, all through time, to reawaken the original breath, to make it possible for mankind to stay faithful to the original covenant, and to respect the divine commandments that ensure that they will live in His light and walk in His path with a way appropriate to time in which they live.

It is within this context the Qur’ān, confirming the essential message of the Revelations that came earlier, goes back to the sources of fitra and confirms it, reviving the original impulse in humans and making them live by recalling it. To reveal, in fact, is to recall the closeness of the faith of Adam, Eve, Noah, Abraham, Moses, Mary, Jesus and all the Prophets. To reveal is to revive the light that is dormant in the heart of each of us and that forgetfulness often dims or stifles.

The historical significance of the verses recited by our Qāri from Surah Ar-Rūm indicates to us the closeness of monotheistic religions, in terms of sprit, between Islam and Christianity. Though the history is long and deep, the relationship between the West and the Muslim world has reached a critical point. The atrocities of 9/11 and their disastrous aftermath show that we have failed in facing the crucial test of the 20th century, the ability to recognize that we share the same planet and to come to terms with each other. If we continue in this failure to accommodate each other, we are unlikely to have a viable world to hand on to the next generation.

In the past, despite lamentable failures in coexistence, Jews, Christians, and Muslims often learned from one another. In Islamic Spain, for example, Jews and Christians found that the encounter with Islam gave them new insight into their own religious traditions. Scholars from other parts of Europe came to al–Andalus to study with Muslims, who helped them to recover the classical learning that they had lost during the Dark Ages. They thus, transformed Western Society.

This spirit of learning from one another is what is clearly lacking nowadays. There exists among Westerners, a very unsophisticated vision of Islam. In the contemporary age, the cosmopolitan, capitalizing, globalizing parts of the world constitute Dār-ul-Harb (abode of war), a terminology commonly used by the Islamists, while Dār-ul-Islam represents an embattled Muslim city on a hill, encroached on all sides by the dark forces of globalization. This black and white image of Islam rests on two absolute assumptions; first, that the main impetus behind Muslim states behavior towards non-Muslims is the desire to spread the message of Islam or become martyrs trying; and second, that Muslims will not rest until Islam becomes the universal creed.

On the other spectrum, there are quite a number of Muslims who view the West with hostility. The experience of democracy as it has been promoted clumsily these past few years, has created widespread hostility throughout the Muslim world not only towards the United States but also towards democracy itself. The very word of “democracy” has been tainted by the blatant hypocrisy, by the transformation of war on terror into cosmic war, and by the unfulfilled aspirations for social and political reform in the Muslim world.

These are the two differing worldviews. Whether these differing views will prolong the confrontations between Islam and the West remains to be seen. What is needed now is perhaps an open dialogue and debate with the other. There will definitely be disagreements, but the contemporary Muslim conscience has to transform this turmoil of converging or contradictory ideas into an energy of debate, renewal, and creativity that produces faithfulness as well as serene coherence at the heart of our modern age and its challenges.